The Night Stairs and the Harrowing of Hell.

These stairs are one of the few areas that remain from the original abbey.  They were used by the Augustinian Canons when they came down from their Dormitory to pray the night-time services.  Over time the steps have become very worn so in 2009 new wooden treads were designed to protect the original stone steps, but still allow them to be visible to visitors and students.  The Cathedral still follows a monastic rhythm in its worship by having three services each day; Morning Prayer, the Eucharist, and Choral Evensong (Evening Prayer).  Read more. 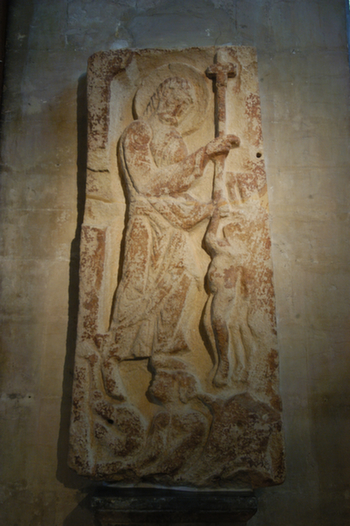 This portrayal of the Harrowing of Hell is one of the finest examples of Anglo-Saxon stonework in existence, and the most important object to survive from Bristol before the Norman Conquest. It proves that there was a place of worship on this site in ancient times. It dates from just before the Norman Conquest, and was discovered under the Chapter House floor after the fire of 1831, where it was being used as a coffin lid. The Harrowing is the term used to describe the newly risen Christ descending into hell to assert his victory over the powers of evil, and to rescue Adam and Eve (representing all people) from imprisonment.