The Cathedral organ was made by Renatus Harris and dates back to 1685.  The original instrument had three manuals, nineteen stops and no pedals.  The manuals were Great, Echo and Choir, with the Choir stops borrowed from the Great.  The casing and some of the pipes date from the 1685 instrument and the original pipes still sound as part of the Great Open Diapason and Open Diapason.

In 1780 the Choir manual was given five stops of its own – housed in their own case – by Seede, a local builder. In 1821 his successor, John Smith, added a pedalboard, but no independent pipes.  Ten pedal pipes were then added in 1838 by Smith's stepson, Joseph Munday. These form part of the present Pedal Open Diapason.

W. G. Vowles – Munday's son-in-law – was in charge of the business by 1860, when the organ was rebuilt.  It was removed from the screen to within the second bay on the north side of the Quire. The Choir case was removed, and there were now 33 stops.  In the 1890s, the organ was moved one bay west, but no other changes were made.

There were several features of the organ which were old-fashioned even for 1861, and with the building of the new nave in the 1870's it was no longer adequate to serve a building which had doubled in length. In 1901 Hubert Hunt was appointed Organist, and began to set in motion plans for the complete modernisation of the organ.

This was carried out in 1907 by J. W. Walker & Sons of London. They retained much of the old pipework (26 stops) but also provided much new material, including all the reed stops, a fourth manual, and a much more fully equipped Pedal division (13 stops compared to 3 in the previous instrument), for a total of 60 stops. The two case fronts were stood side by side. The console, tubular-pneumatic action and soundboards were all new. The instrument was dedicated on 8 October 1907. It is one of the finest examples of the English Romantic organ to be found anywhere in the world, and has survived almost unchanged to this day.

Some repairs and minor tonal alterations were made in 1947 and 1970, but it was not until 1989 that a complete restoration was undertaken.  This work was carried out by Manders.  The action was restored, the console ‘playing aids' were slightly increased, and five stops were added.  The casework was cleaned, and the solid timber panels at the bottom of the east case were replaced by grilles, as the pipes behind could barely be heard.

In 2004, some further restoration work was carried by Cawston, and the console ‘playing aids' were once more increased. 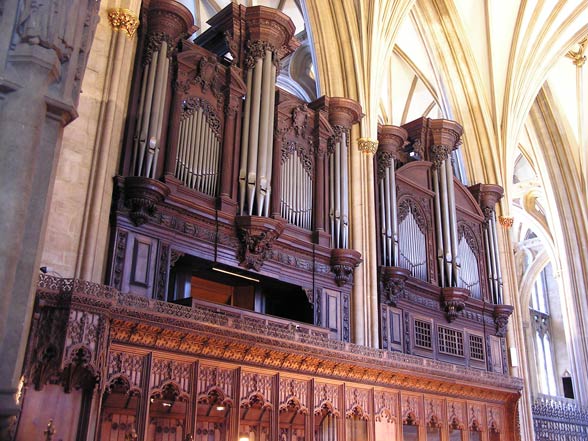 *This old Choir case now houses the Chamber Organ in the Eastern Lady Chapel. It returned to the Cathedral in 1956, having been used as a domestic bookcase!