Commissioned from artist Jacquie Binns by the new Dean, Mandy Ford, to celebrate and mark a new ministry at Bristol Cathedral. Jacquie is an extraordinary textile artist who uses machine embroidery to create her figures, with great liveliness and individuality. Among other notable commissions, she made a complete set of copes for St Alban’s Cathedral and embroidered the velvet pall that covered the coffin of Richard III prior to its interment in Leicester Cathedral.

A cope is a ceremonial cloak for liturgical purposes. Its origins go back to the middle ages and its shape, a semicircle of silk or brocade has not changed since that time. Early copes were hooded, but the hood has now been replaced by an ornamental panel. The cope is fastened with a morse, a strip of embroidery which is hooked across the front, and decorated with orphreys or strips of embroidery.

This cope is made from white silk with a white silk orphrey embroidered with lively figures chosen by the Dean. The colour scheme of scarlet and blue is taken from the paintwork in the Eastern Lady Chapel.

These are the figures depicted and the reasons for choosing them.

The Dean is a member of Anglican the Third Order of St Francis - a community of men and women who follow a rule of life in the footsteps of Francis while living and working in the world. The Franciscan cross (the Tau) is used on the stole which is worn with this cope.

Mary Magdalene and Mary the Mother of God

The ministry of these two women, very different in their character, has inspired women through the ages to offer themselves to God and to follow his calling. Mary Magdalene is shown holding an egg, an ancient symbol of resurrection, recalling her role as the first witness to the resurrection and apostle to the apostles. Mary, the Mother of God, is shown dancing with joy at the news that she is to bear the Son of God.

The first church on the site of Bristol Cathedral was founded by followers of St Augustine in the 12th Century. Augustine was Bishop of Hippo in North Africa and his portrayal is a reminder of the debt we owe to Christians across the world. The Augustinian Friars were renowned for both their learning and service to the local communities in which they were situated. St Jordan was a companion of St Augustine of Canterbury, apostle to the English, and there was a hermitage dedicated to him on College Green. He carries a flagon, symbol of his role as a deacon also seen in his icon in the Elder Lady Chapel.

The patrons of arts and crafts. Without the work of artists and craftsmen we would not enjoy the beautiful building in which we worship today. The figures of Catherine and Dunstan remind us to pray for those who today maintain and enhance our building through their skill and artistry. Catherine, another Franciscan saint, was an aristocratic woman trained drawing and painting, writing and music, who continued these activities after entering a convent at the age of 13. Dunstan is a 10th Century West Country saint, skilled in calligraphy and painting he was Abbot of Glastonbury and responsible for significant repairs and improvements to its buildings. 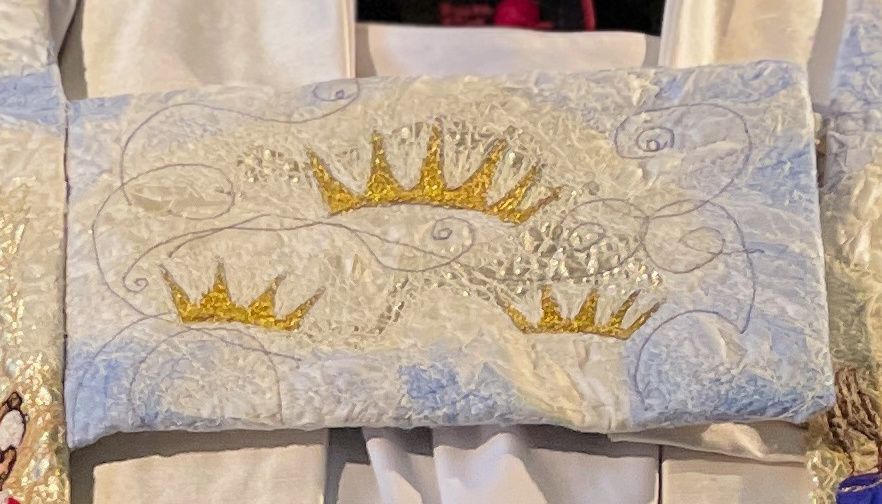 The clasp of the cope is embroidered with the three crowns, symbol of the Holy Trinity to whom the Cathedral is dedicated.

The embroidery on the hood depicts a ship sailing towards a city on a hill with a rainbow overhead. The ship is the logo of Bristol Cathedral, making reference to its origins as a port city. However ships also have a rich symbolism in the Christian faith: Noah and his family were saved from death by God protected in the Ark; Jesus calmed the storm and saved his disciples from death as they sailed across the sea of Galilee; and the church is sometimes known as the Barque of St Peter partly due to the similarity between the shape of early churches and early ships, with a central nave (Latin for ship) and two aisles. The rainbow is a reminder of the story of Noah, a remembrance of the NHS in 2020 and a symbol of inclusivity.

« A Christmas of Comfort and Joy