A History of the Organ

Mark Lee, Master of the Choristers and Organist tells us about his love of Bristol Cathedral's historic organ:

“The instrument seen from the floor of the Cathedral dates back to 1685: the year of both Bach and Handel’s births. It was built by one of the country’s best organ builders, Renatus Harris, and was originally placed front-to-back, East-to-West on a medieval screen in the Quire. The pipes seen from the Quire also date from this period and still ‘speak’, giving a wonderful aural insight into the sound of the building in the 17th century. The woodwork and pipes now act as a screen for the instrument within it. This instrument has changed as organ musical repertoire changed – originally it was a shallow instrument, it now has a depth of several feet and contains over 5,000 pipes.

By the 19th century, the Cathedral was looking very different than when the 1685 instrument was added: a new Nave had been added and the organ had been moved from the screen to its current position. In 1907, the Chapter took the brave (considering that they’d just invested heavily in a new Nave, created and designed by revered and expensive architects) decision to employ the best organ builders – Walker – to build a new instrument, fit for the space. The instrument that we have now is largely unchanged from this 1907 instrument – which is both good and bad. The instrument avoided any of the unfortunate renovations made to organs in the 1960s and 1970s and retains its original exceptional sound.

However, its technology dates from 1907 – the best analogy is that of a car. This is 1907 vintage piece which, rather than being driven on occasional Sunday afternoons in the countryside, is driven every single day, usually for over 20 hours each week and considerably more during Lent and Advent. The tubular pneumatic action, which relies on puffs of air travelling through the instrument to reach the right pipe and form a sound, was old fashioned when it was fitted in 1907 and is now incredibly inefficient, unreliable, with very few people able to fix or tune it and with varying time delays between notes and pipes. No-one would build an instrument like this now and no one is able to work on it. On a good day, 90% of the sound might be heard. There are some pipes and sounds which, in my 20 year tenure as Master of the Choristers and Organist, I have never heard. A sensitive and proper renovation would be hugely exciting for current organ builders, would help to preserve and clean the already exceptional sound quality and would mean that pipes and sounds were made fully available for the first time in decades”. 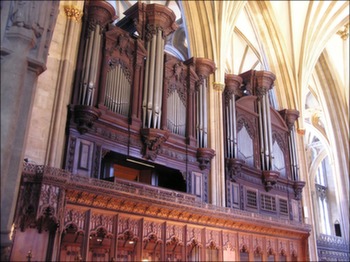